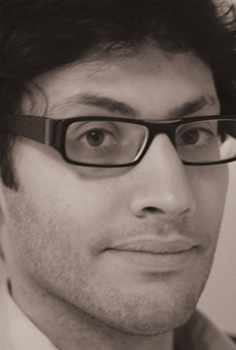 My name is Neil and this is my Testimony.

I’ve been working in sport journalism since the Beijing Olympics and I’m also a keen football fan. I don’t play so much anymore but I still follow the premier league.

I think the Olympics will be the best way to recruit youngsters into sports, into some of the more obscure sports as well as, you know, football and other national sports. And I think that the infrastructure and the development of Stratford will help to regenerate the area.

I’d like to get to Wembley because I used steward to in the media lounge, so I used to see the press file passed and I’d like to be working there and- And yeah, work there in my own right and get to Stratford and see the venues there.

I guess the event people will be looking out for will be the sprint- the 100 meters. But the trouble with that is that it’s over in ten seconds, so it is a highlight but blink and you miss it. So I would like to see that, though.

I remember when the new logo was unveiled, it was quite a shock and I think it may be because the colours were quite garish, with the colours that were bright pink and bright green. But it’s actually grown on me quite a lot so I do quite like the logo now. And the mascots I’ve seen is similar as well: it’s bit of a shock when you first see them, they’ve got one eye- I think one of them has one eye and [laughs] it’s a bit scary, but I think that they’ll grow on people’s affection.

The Royal Mint with London 2012 have organised the competition to design coins a 50p coin for each Olympic sports, so they’re 29 in total and my football design was chosen. It’s a diagram explaining the offside rule and- So yeah, I was obviously quite pleased about that so that’ll be in the shops, so it’s obviously good to be able to contribute to the Olympics in that way, in a small way.