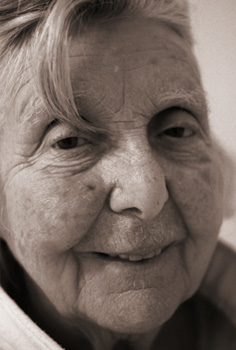 My name is Susan. This is my Testimony.

The ‘48 Olympics seem now a very long way off but when I was little, I was always a very keen swimmer and all I wanted to do was to take part in the Olympics when I grew up. Eventually, I really got much much better and I was an Olympic possible, and I became an Olympic probable, and eventually I was chosen to swim in the 100 meter freestyle in London in the Olympics.

Well, the Olympics were a fantastic event. We were swimming at Wembley in the Wembley pool and we were lodged all over the place and I was staying with my teammates in St Helen Laws wood.

With the Olympics ceremony, it was nothing like what they expect nowadays from Olympic ceremonies. There was a- The countries were going in and the Olympic flame was brought in and the Olympic flame was- was put up in Wembley- If I remember rightly. I’m not quite sure after all these years. I remember it wasn’t- They had no performances. It was not like Beijing or the other Olympics I have seen on television because it was [pause] all about the sport.

I learnt English in Hungary in the gymnasium. In fact, the captain of the Hungarian team asked me to translate all the time so this was a bit tiresome because just before my race, about half an hour before, he also asked me to translate and I said: “Oh my god this takes so much out of me in this heat and I’m going to swim the race of my life!”

We travelled by public transport, by Underground. We haven’t- probably- Probably some bus connections, but we certainly didn’t have any special mini cabs or cars or bus. And ‘48 was like opening a new world after the Second World War. And it’s wonderful that the next Olympics will, are going to be had in London because it’s just absolutely wonderful how time repeats itself. And strangely enough, economically, there seems to be troubles again.